After a convivial lunch at the Cowick Barton Inn, 22 members of Exeter Branch gathered for a talk given by Margaret Vickers, Community Support Worker at this Devon charity. What followed was an hour of participation and learning as Margaret got us involved in her presentation.

First came a quiz, challenging some commonly held beliefs. We learned that on average, within a group of 100 blind people only five will use braille, just four have no perception of light and only one will have a guide dog. Eighty per cent of visually impaired (VI) people are over the age of 60 and among VI adults of working age just one in every four is employed. Some of our guesses were better than others!

Then Margaret produced her box of spectacles that simulated the effects of specific eye conditions and invited us to try them on. This proved to be quite alarming as we experienced tunnel vision, (resulting from glaucoma) loss of central vision (macular degeneration), patchy vision loss (diabetic retinopathy) and blurred images (severe cataracts) among others. This reinforced the importance of having regular eye checks so these conditions can be picked up early, treated and monitored. Margaret also explained that smoking, diabetes and strokes were known to affect vision.

On a positive note, the final part of Margaret’s talk focused on the help that is available locally to support people with sight loss that affects their ability to carry out daily tasks such as making a cup of tea, reading the paper and cooking meals. We saw – and heard – the liquid level indicator beeping when Margaret poured water into a glass, we learned about talking kitchen scales, local talking newspapers, large print library books and tactile markers (bump-ons) that stick onto the cooker to indicate temperature markings. We were told about the Royal National Institute of Blind People’s (RNIB’s) Talking Library with its extensive collection of titles and were reminded of the importance of good task lighting which is vital as we get older. 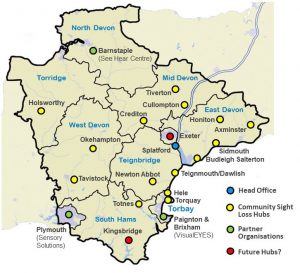 At Devon in Sight’s centre at Kennford, just outside Exeter, people with visual impairment can arrange to try out items from a range of special equipment, both low tech like lights and magnifiers and high tech such as computer-based programs, while throughout the county small groups called Hubs meet at regular intervals for talks, socialising and sharing tips; for example did you realise that the figure 5 on a keypad has a raised dot? Home visits can be booked for a ‘Sight Loss MOT’ where an adviser from Devon in Sight explores what items and services a VI person might find most useful in order to support their lifestyle.

As we walked out into the afternoon sunshine Margaret’s advice was to remember to wear our sunglasses!