The Reverend Christopher Pidsley gave us an informative and highly entertaining talk, as he introduced us to Jan Stewer, the well-loved character created by Albert John Coles. We learnt something about the life of Coles himself and joined in singing a couple of Jan Stewer’s own songs, including Jan’s song about his wedding day, “Out stepped mother and me”. 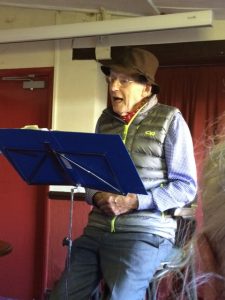 The highlights of the talk were when Reverend Pidsley donned an old brown felt hat such as Jan Stewer himself might have worn, and read extracts from three of Jan’s Stewer’s short stories, all full of wit and humour. Jan told us of the night when, instead of using their well-worn bed-warming pan, his wife used a hot water bottle which leaked. In “The Swell Dinner”, we see Jan going for the first time to a grand hotel, and being confused by the variety of cutlery provided, and the waiter’s unexpectedly prompt removal of his plate after each course during the meal.

Reverend Pidsley finally read “Jan and the Census Paper”. Jan was reluctant to fill in what he refers to as the “Senseless Paaper”. He finally fills it in, with his wife Ann and daughter Jane overseeing proceedings. Jan speaks first in this extract:

I wraut down me name, and then her said:

“Whether I be head o’ the vam’ly or no. Must write done Eees, I spause.”

Jan Stewer lives on. Although the books may be out of print now, they are still available in charity and second-hand book shops and on the internet.