Mark told us a little about the canal’s history. It was originally part of a plan to join the Bristol Channel at Bridgwater to the English Channel at Topsham, thereby avoiding the long and perilous journey around the Cornish peninsula, and enabling the passage of goods, including coal from South Wales, into the heart of Somerset and Devon. This grand scheme was never fully completed, and parts of the canal that were built have fallen into disrepair or are derelict. The section linking Tiverton with the limestone quarries at Westleigh was actually the first to be built, in 1814, even though it was mostly a branch from the original planned route. The intention was that the limestone trade would provide an immediate profit financing the rest of the scheme.

Waterlily harvesting took place in the first half of the twentieth century, and Mark showed a number of interesting photos of the canal in its earlier times.

The canal became a country park in 1968, and is now owned and managed by Devon County Council. The towpath was resurfaced in 2003. A team of rangers look after the park, tending to its rich and vibrant variety of flora and fauna, and ensuring that its many users can pursue their activities – kayaking and boating, cycling and walking, fishing and nature-watching, the horse-drawn barge – safely and without conflict. There is much physical maintenance to be done, from weed-cutting to keeping culverts clear of sediment. A particular problem in recent years has been water-soldier, which is sold as an ornamental plant for ponds but has become an invasive weed; the canal has a new boat specially suited to deal with this.

The dramatic event of recent years came on 21 November 2012, following torrential rain, when the canal overfilled and the bank collapsed near Halberton, flooding the nearby fields. The rangers, along with emergency services, moved swiftly to block off that section of the canal, and a subsequent operation rescued many of the thousands of fish that had spilled over into the fields. The Council decided on a complete repair, which was completed by March 2014, in time for the canal’s bicentenary. Mark showed spectacular pictures of the breach, and of the celebratory reopening.

Mark clarified how the canal is financed. Revenue costs are some £172K per year, of which 72K come from Devon County Council and 45K from mid-Devon District Council. The rest is covered by income from diverse sources including parking, fishing and boat permits. Capital costs are mostly covered by DCC with occasional other funding when available. Mid-Devon funding is not assured, and at one stage the council officers were inclined to cut funding; councillors, however, remain strongly supportive of the canal.

We were each given a Visitor Guide to the canal, jointly published by DCC and Mid Devon DC, covering wildlife, ways of exploring, fishing, Code of Conduct and maps of the area. I recommend collecting a copy from Tourist Information! 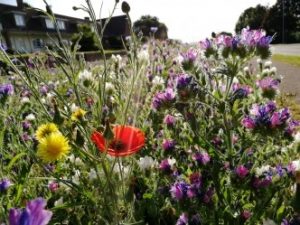