19 members enjoyed a talk by Alex Sully on “The Morgan Car”. Alex was at pains to emphasise that he has no connection with the Morgan Car Company or any trader in Morgans but has been an enthusiastic owner of Morgans for 40 years. He writes newsletters for “Oggiemog”, a local branch of the Morgan Sports Car Club.

He began by telling us of questions guaranteed to infuriate Morgan owners:

(i) ”Is the chassis made of wood?” None have ever been,

(iii) “Have all the Morgans ever made been painted by the same man using the same brush?”

A moment’s thought would answer the last, since the first three-wheeler was made in 1906 in a garage at Malvern, where the company later built the present factory, which had to be sold during hard times and was re-bought later. The first car consisted of little more than a two- cylinder engine and two wheels at the front, a rudimentary tubular chassis, a chain-driven wheel at the back and a single seat for the driver, who got very wet and muddy on the roads of the time. This problem was partially alleviated by the addition of a simple open, single-seater body.

Dashing young men found that the cars attracted ladies and two-seaters were developed, rapidly followed by four-seaters to accommodate chaperones or, later, children. The three-wheeler was continuously developed for many years but was superseded in 1936 when Morgan produced its first four-wheeled car. This was named the 4/4 as it had four wheels and an engine with four cylinders. The 4/4 remains in production with only detailed modernisation and its layout has been the basis for all Morgans until very recently: A chassis with angled steel members, a unique system of independent front suspension, “cart-springs” at the back and a wooden (ash) frame to an aluminium body. Various engines and many other components have been bought in from other suppliers and this has sometimes caused the factory yard to become clogged with incomplete cars.

Increasingly powerful (and expensive) cars of similar appearance have since been produced and many have achieved success at motor-sport, particularly in trials over bad ground and in hill-climbs. There is an established series of races run for Morgans and the marque probably achieved its greatest success in 1962 when it won the 2 litre class at Le Mans against much more prestigious makes, despite scornful comments about its antiquated design.

Recently a director of the firm remarked casually to a journalist that they considered producing a new three-wheeler. This was published and such was the public interest that the company felt that they had to go ahead. The resultant car has been very successful despite being introduced in such a hurry that early customers had to iron out some faults that should have been discovered at the development stage. Nevertheless it has done much to improve the company’s finances.

Morgan has experimented with an electric Morgan and a fuel-cell car but these have not reached production. 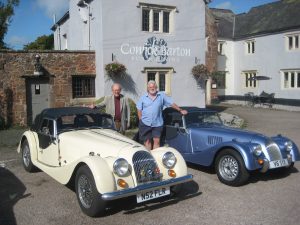 Morgans are cars much loved by enthusiasts; they are noisy and rough, often fitted with a hood which takes 15 minutes to erect  (and then leaks), have minimal luggage space and have suspension so hard that a common joke is that if you drive over a coin you can tell if  was “Heads” or “Tails”

Alex ended his talk with a series of photographs illustrating production techniques involving his own car at various stages in its build. He answered questions from the audience and was thanked by Louise Clunies-Ross for a most entertaining and informative talk.