This visit to Totnes, ably arranged by Robina Brand, took place on the summer solstice, and it turned out to be the hottest June day for 40 years. Totnes is a fascinating town, proudly guarding its independence and character; it is reputed to have more listed buildings per head of population than any British town.

We began by exploring the Elizabethan House and Museum, which contains a wonderful variety of objects connected with the history of Totnes and with this particular building – originally the home of a wealthy merchant. We enjoyed exploring the various rooms, including the main bedroom, dining room and the Elizabethan kitchen, but we had no luck in seeing the resident ghost. Outside at the back was a lovely Elizabethan herbal garden. 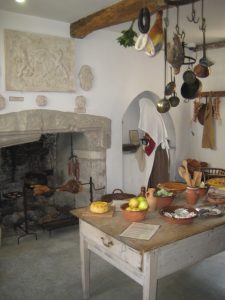 On the top floor is a wonderful exhibition on the life of Charles Babbage, the most illustrious son of Totnes. His Analytical Engine was the precursor of the modern computer. We also learned about the “enchantress of numbers”, the visionary Ada Lovelace, Lord Byron’s only legitimate daughter. Her prodigious mathematical talents led to a long working relationship and friendship with Babbage. In fact she developed the first set of notes or algorithms for the Analytical Engine, and these can be considered as the first step in the development of computer programming.

After the museum, our guide Nick took us up the road to show us the outside of St Mary’s Church. Originally it was a Benedictine priory church, but in the 15th century Bishop Lacy granted an indulgence for a complete rebuild. Then it was on to the Guildhall, which has nearly a thousand years of history. The original priory was largely destroyed at the time of the Reformation, but it was rebuilt in 1553. Over the years the Guildhall has been used as the town gaol – one cell can still be seen – boys’ school, magistrates’ court, and today it still serves as the Council Chambers and Mayor’s Parlour for Totnes Town Council. Cromwell and Fairfax are said to have sat at the table in the Council Chamber to plan the closing stages of the Civil War.

Our short visit to Totnes was rounded off with a splendid lunch at the Old Library room in the Royal Seven Stars Hotel. The whortleberry parfait was quite something!

Thank you, Robina and Nick. 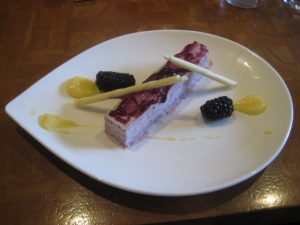