When a group of fifteen members gathered at the Royal Oak to hear a talk by Brian Smith on Storybook Dads, it was probable that at least thirteen of us had very little idea of what Storybook Dads was about. We soon discovered that it was a charity that aimed to keep families together by enabling men in prison to maintain loving contact with their children by recording bedtime stories, which are edited and enhanced with sound effects before being put onto a CD or DVD and sent to their children. 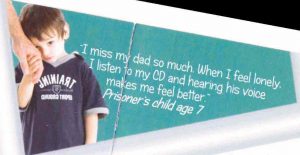 The background to this work comes from a number of frightening statistics:

So what could be done to help to change the situation? Storybook Dads began in HMP Dartmoor in 2002 with the idea that contact could be maintained between dad and child by enabling the child to listen to their dad’s voice telling them a story at bedtime. Prisoners can also create read-along DVDs, personalized memory books, comics and challenge charts for older children. Storybook Dads is a very simple idea that has been shown to be a lifeline, helping to heal rifts and maintain or build vital relationships between prisoner and child.

A quote from a child puts it well: “I miss my dad so much. When I feel lonely, I listen to my CD and hearing his voice makes me feel better”.

Another quote, from a prisoner, “It helps my daughter with her reading and confidence (and mine!). I feel like I’m becoming the dad I always wanted to be. This is the best I’ve ever felt”.

The idea behind Storybook Dads has been shown to be working in practice. The charity is now based at HMP Channings Wood and provides a base for editing and producing discs of stories from about 90 UK prisons. About 20 prisoners are employed at Channings Wood to work on audio, video and photo editing software to produce the bedtime stories. As prisoner editors leave upon their release, others are trained in their place – so far about 500 prisoners have been trained, leading to increased job opportunities outside prison.

The charity has received a National Lottery grant to enable them to extend the age range of the children being helped and to enable other activities, such as craft, story writing, memory books and calendars to be introduced. Storybook Mums now exists in many women’s prisons. Similar schemes have been introduced in many other countries, including Australia, Japan and Poland. The scheme is now being adapted so that RAF, Army and Royal Navy personnel deployed abroad can record bedtime stories for their children.

At the end of an excellent talk and presentation, we all agreed that it is astonishing how a simple idea can blossom into a countrywide, even worldwide, force for good among a group of people who can all use a second chance to live a better life within their family and the wider society.

More information can be found by visiting the Storybook Dads website: www.storybookdads.org.uk