Exeter insights: a talk by Professor Jeremy Black about our University

In the familiar surroundings of Reed Hall – now transformed into an elegant events venue – Alumni Development Manager Clare Pearce welcomed Exeter Branch members on a sunny September morning. Also joining us was a large group of alumni friends from across the UK and overseas who were holding their annual reunion at Exeter, organised by Sheila and John Morgan. We were looking forward to a talk given by Prof. Jeremy Black, based on issues covered in his book ‘The City on the Hill’, published to celebrate the University’s Diamond Jubilee in 2015. Professor Black proved a forceful and incisive speaker, highlighting many of the changes that had taken place and the challenges faced by those who governed and administered our University from its early days. 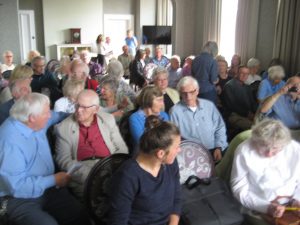 Looking forward to the talk

We heard about Exeter’s struggles to expand in a mainly rural region that lacked wealthy benefactors. Exeter received its University Charter in 1955 and at this time there were few buildings on the Streatham Estate and some lectures still took place in the city centre. However the 1960s saw a big expansion of student places and Exeter’s campus developed considerably at this time, although university life remained relatively unaffected by the extremes of student activity experienced elsewhere in the country.

With security of tenure for lecturers, university life drifted along comfortably during the 1970s and 1980s but by the 1990s Vice-Chancellors and Registrars could see  the need to raise standards and bring in research money in order to support university departments if they were to survive. Thus the early years of the 21st century at Exeter witnessed a sea change as governance, teaching, research, academic structures and members of staff all experienced major upheavals. Whole departments were closed and many staff made redundant while administration and governance were streamlined.

As a result of this radical action, Exeter today has excellent standards of teaching and research across three campuses in Devon and Cornwall, efficient and effective governance and ranks as one of the top ten universities in the UK. Constant work is required to maintain this position, achieved under the strong leadership of Vice-Chancellor Sir Steve Smith. Financial challenges continue, however, as resources and needs are so finely balanced in today’s fast-changing world.

After his talk there was a welcome opportunity to speak informally with Prof. Black, to look through his book ‘The City on the Hill’ and to chat when he joined us for lunch in the Woodbridge Room.