The Club welcomed Derek Gore who is an Honorary Fellow of the University. He was previously a part-time lecturer in the Department of Archaeology, where he lectured on the Viking Age in the British Isles and Europe.

He explained that the early activities of Scandinavians, probably mostly Danes, in our territory were motivated by the desire to acquire portable wealth that could be taken back home. Illustrations were shown of their craft, which were powered by a mixture of sail and oar. They had open hulls, giving plenty of space for cargo which could be taken on board rather in the manner of a modern container ship. Our coastline with its many estuaries, including the Teign and the Exe, offered opportunities for easy landfall to the highly manoeuvrable shallow-draft Viking ships, bringing scope for the invaders to seize, first land and even eventually political power. In 1001 AD they got as far as Exeter.

Derek covered the impact of the Vikings on what we now know as the West Country from the late eighth to the eleventh centuries. He reviewed the sources that are available to historians in this field, including written records such as the Anglo-Saxon Chronicle. Archaeological work has uncovered many stone sculptures from the period including crosses and memorials. Also important were finds of metal objects, some uncovered by amateur metal detectorists. Of particular local interest was a find of not only fragments of metal but a number of glass beads on the Island of Lundy off the North Devon coast. The origin of these is not entirely clear but they could indicate there had been a female Viking burial on the Island. Place-names too are an area of interest to scholars. The name Lundy itself is Old Norse for puffin island. Given its strategic position in the Bristol Channel with prospect of safe anchorage it is difficult to see that the Vikings could have ignored the island. 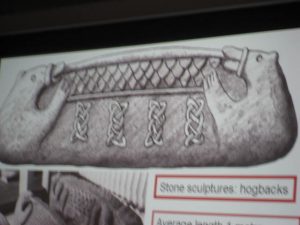 This short talk was a much-condensed version of a well-established course that Derek had taught, but it gave us a flavour of a fascinating period. The Viking impact on our history was crystallised when we considered the figure of William the Conqueror. In 1066 AD after the death of Edward the Confessor, the Norwegian king Harold Hardrada and William Duke of Normandy who was a direct descendant of a Viking leader both brought armies to England to fight for the throne; the outcome we all know. After the talk there were several very well-informed questions and comments from the members, which drew forth more interesting information.

Mr Gore has written a very readable book, The Vikings in the West Country (published by the Mint Press). I have found it an invaluable aide-memoire in writing this short report.