Paul’s illustrated talk could well have been entitled ‘Dartmoor’s industrial secrets’ as we were treated to a whistle-stop tour of the many activities on the moor that have taken place since man first set foot in the region.

Much of the original stunted oak woodland was used for fuel. In the Bronze Age, settlers who found cassiterite ore in Dartmoor streams used wood to heat the crushed stone in order to extract the liquid tin. From the 1600s a thriving tin industry grew up on Dartmoor with the aid of water power, and trade centred on the stannary towns of Chagford, Tavistock, Ashburton and Plympton which grew wealthy on the proceeds of tin that was assayed, taxed and traded in these four towns. Ore was extracted from seams that were traced far underground, along shafts and tunnels all worked by hand; miners led a hard life and few reached the age of 50. Much of the tin was used to make pewter which was widely used for mugs, cups and plates throughout Europe at this time. Once the good quality seams were exhausted mines became uneconomic and by the 1800s many were abandoned, leaving relics of stone buildings that can still be seen today – as well as some hazardous mineshafts!

Over the centuries other industries have included peat cutting (no longer are there any commoners’ rights for this activity), mining for railway ballast at Meldon until 2008, a glassworks producing green bottle glass in the 1920s, granite quarrying for pavement and building stone and in localised pockets lime kilns were built to produce lime mortar and most importantly lime for use in farming to improve the soil. 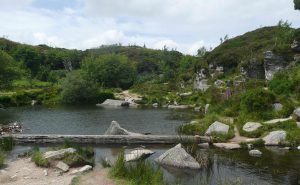 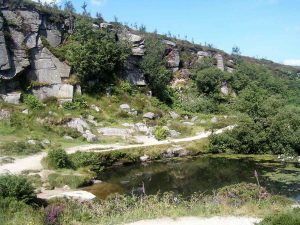 Relics of these activities can be seen on the moor with old quarry sites, the granite tramway at Stover and the rails near Haytor. There was once a papermill at Ivybridge that produced the paper for all the UK’s postage stamps and banknotes. Gunpowder for use in the old tin mines was made at a site on the moor between Two Bridges and Postbridge that still bears the name ‘Powder Mills’. Another intriguing feature consists of the gentle mounds that can be seen in various parts of the moor – these are artificial rabbit warrens, built up to create dry sites suitable for rabbits to burrow into and breed as rabbits were a major food source for the mining communities on the moor for many years.

From the 1850s, china clay was first extracted from south Dartmoor, leaving huge spoil heaps across the landscape and today a tungsten mine has just opened on an old site but using modern mining technology to extract this valuable mineral. Also today, while tourism brings people to the area, small scale hydro-power sites make use of the region’s natural resources at Mary Tavy and Morwellham.

Next time you are on the moor, keep your eyes open for some of the many signs of its intriguing past – there are many to see!