“Carry on Up the Jebel” 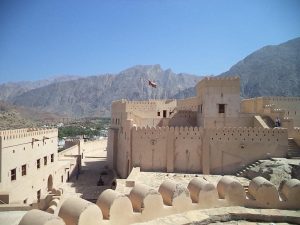 George gave us a most informative and at times amusing talk on his time in the RAF in the 1950s. It seemed quite a complicated political situation in Oman at the time arising from The Treaty of Seeb (1920), which granted sovereignty over the whole of Muscat and Oman to the Sultan of Muscat while control of “Oman Proper” (the interior including the Jebel Akhdar (Green Mountain)) was in the hands of the Imam of the Ibadi sect of Islam.
The Sultan granted licenses to the Iraq Petroleum Company to explore for oil, disregarding the fact that the largest potential oil fields lay inside the Imamate. Saudi Arabia wished to lay hands on this area and had been rebuffed with British help in 1954. In 1957 the current Imam, Ghalib bin Ali al Hinai, together with his brother Talib and other tribesmen, aided by Saudi and Egypt, seized control of the interior, repelling the Army of the Sultan.

The Sultan called on help from Britain and as a result George was stationed with the 249 squadron in Sharjah, Trucial Oman (now UAE), flying Venoms carrying rockets and cannon. Its role was to attack historical forts (later to become World Heritage Sites) belonging to the rebellious sheikhs. The Sultan’s army succeeded in recapturing the plains areas but the leaders of the rebellion escaped to the Jebel Akhdar. At this stage George was attached to the Sultan’s army as air liaison officer; his job was to call up air support when necessary. He took part in two unsuccessful attempts to reach the plateau at the top of the mountain before re-joining his squadron. The “Jebel War” ended in 1959 when the SAS climbed the side of the mountain and abseiled down onto the plateau.

George was awarded the Order of the Green Mountain medal for his part in the conflict.
Susie Hewitt (with help from George)