A temperature of 27˚C, daylong sunshine, and not a cloud in the sky! That was the weather we were treated to for our cruise on the River Tamar. It also meant a delightful journey by train to get to Plymouth, along the famous coastline near Dawlish, with its new sea defences. The cruise started at 2.30 p.m., which gave me time to get reacquainted with some of the sights of Plymouth. I visited the famous Hoe – where Sir Francis Drake is reputed to have insisted on finishing his game of bowls before tackling the Spanish Armada – and explored the historic Barbican district, which largely escaped the wartime bombing.

The cruise took us along the Plymouth waterfront past a vast number of shipyards – now largely idle – and then up the river itself. Passing under the old Royal Albert railway bridge, designed by Isambard Kingdom Brunel, and the much newer Tamar Bridge, used by road traffic, our boat headed north to Calstock, though at one stage – because of a twist in the river – we found ourselves heading due south. Some of us enjoyed a pasty on the boat, but there was also time to stock up with food and drink during a leisurely stopover at the Tamar Inn, beside the impressive Calstock railway viaduct, before heading back to Plymouth in the lovely late afternoon sun. 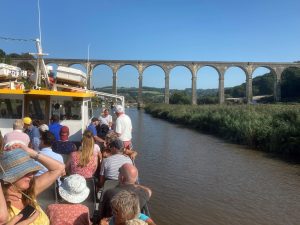 Sadly, only a few members of our club chose to take this trip, but those that did were richly rewarded. We were particularly pleased to welcome our sole Cornish member, Alan Read. Thanks also to Val Ayres for proposing this trip.