…and what a treat Peter Wingfield-Digby had for us! Members of Exeter Branch enjoyed a nostalgic afternoon looking back at our familiar campus with the aid of Peter’s photographs and material sourced from the University Archives. Those of us who were students in the 1950s and 1960s have witnessed a transformation on the Streatham Estate in subsequent decades – and more change is to come.

First, however, Peter outlined the University’s origins in the 1850s, the move to the Royal Albert Memorial Museum in Queen Street in the 1860s, and on to Bradninch Place in Gandy Street in 1900 when it was renamed the Royal Albert Memorial College. In 1922 it became The University College of the South West of England. That same year Alderman Reed gave Streatham (now Reed) Hall to the new University College, and the first Principal (Hector Hetherington) persuaded the university council to purchase a large part of the Streatham estate.

Since then the University has flourished, growing in status and size whilst retaining the magnificent arboretum, ponds and streams that enhance the setting of its early buildings and those being built today. In 1955 when Exeter received its Charter and became a University it had many significant buildings on site. We saw early pictures of the Washington Singer, the Roborough, The Queen’s Building, Northcote House, the Hatherley Laboratories and Devonshire House as we remembered them in the 1960s, all looking rather new and with a decided absence of cars nearby! 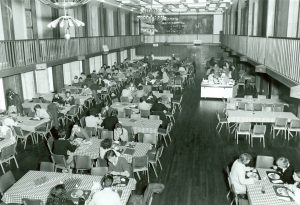 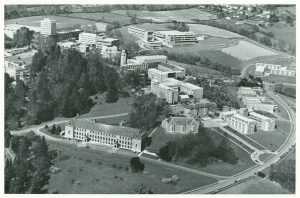 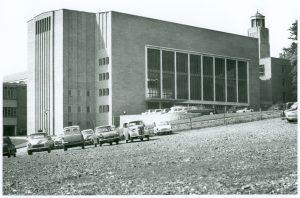 Published with permission from the Special Collections, University of Exeter.

We enjoyed looking at familiar buildings as well as some under construction in the sixties when Car Park C was a muddy slope beside Stocker Road used by builders’ vehicles. We saw the original pre-fab structures at the bottom of Rennes Drive that are now part of a smart enclave of Finance buildings, remembered the peaceful Upper Hoopern Valley with its ponds (pleased to see descendants of the ducks are still in evidence!) and looked at pictures of the engineering building along North Park Road where Clive proudly pointed out his office windows!

In conclusion, Peter reminded us that our university is now a member of the prestigious Russell Group and was recently rated as first for overall student satisfaction in a national survey of student opinion. Thank you, Peter, for a most interesting afternoon.