Gwyneth was born in Liverpool and on leaving school in the 1950s was not sure what she wanted to do! So, like many girls, she took a secretarial course. This equipped her for her first job, which was in a solicitors’ office in Brighton. However, in spite of her employer offering further training, Gwyneth decided the life she was after was all happening in London and this was where she wanted to be.

A schoolfriend training to become a nurse in London suggested a change of career and Gwyneth applied successfully to the Middlesex Hospital, close to central London. Despite the beige uniforms, long hours, hard work and no make-up, Gwyneth and her friends managed to enjoy and to observe many aspects of London life – which was certainly colourful in the late 1950s. Graduating as an SRN in 1959, Gwyneth decided that she wanted to travel. Ever enterprising, finding that BOAC were not recruiting, she took a job in Sweden, learning some of the language and was subsequently successful in gaining a post as stewardess with BOAC.

It was an exciting time during the 1960s as the Comet and 707s came into service and many long-haul flights with stopovers for the crew in good hotels in far-flung places were the norm. Gwyneth spoke about some of the well-known people she had looked after and memorable places she had visited during this time. We heard some lovely anecdotes and saw some delightful slides of sunny locations. During the 1960s Gwyneth met George Garner, an airline pilot and they married in 1968.

However the 1970s brought sadness and personal tragedy to Gwyneth and George, with the loss of two baby boys, each under the age of two, due to a genetic disorder. After much heart-searching they adopted a little boy in 1975 and enjoyed family life in Hampshire while he was growing up and George was still flying. Gwyneth did some work as a Family Planning Nurse as time permitted.

In the 1980s George took early retirement and embarked on an OU degree, after which he taught in Exeter following the family’s move to Devon. Gwyneth, meanwhile, started a degree in French at Exeter University, graduating at the age of 50! Shortly afterwards a job was advertised by the NHS, that as Gwyneth said ‘had my name on it’ – a genetics nurse counsellor for Devon. With her nursing background, her personal experience and her understanding of the impact of genetics on certain inherited conditions, Gwyneth was able to give great personal support to families who were experiencing significant stress. As she explained, much progress has continued in this area of medicine with many recent advances. 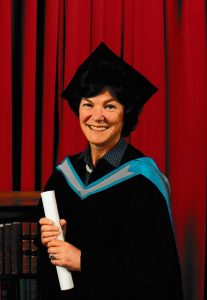 Following retirement in 1999 Gwyneth has been a churchwarden, served on her local town Council and is presently learning to play the church organ!

Thank you so much, Gwyneth, for a most absorbing, entertaining and at times poignant talk; our largest Zoom audience ever is testament to the affection and respect our members have for you. And thank you for donating your fee to the Exeter Hospice.