Jenny Balfour-Paul gave an interesting presentation on Indigo, which had been the subject of her PhD thesis carried out at Exeter University, where she is now a Research Fellow of the Institute of Arab and Islamic Studies.

She pointed out that for 5000 years all dyes came from natural resources – both insects (e.g. cochineal) and plants (e.g. Madder) for Red; Yellows came from practically anything yellow that grows;  whereas all Blues were Indigo.  Indigo is a double molecule with a unique and unchanging chemistry found in the leaves of many different plants from all over the world.  We in the UK are all familiar with woad-indigo, product of the woad plant.  The green leaves are soaked in water, the leaves are then removed, leaving a clear liquid, to which oxygen is added, miraculously turning the liquid blue.  Indigo is totally colour-fast and coats and strengthens fibres. 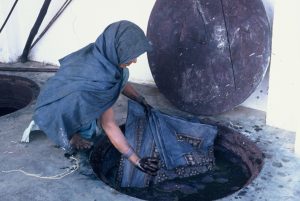 In the process of her PhD research and more recently, Jenny has travelled widely, chiefly in India, the Middle East and China. She illustrated her talk with many fascinating pictures of locals producing and dying fabrics with indigo.  She discovered that the last two indigo factories were in Yemen, which she visited in the mid-1980s.  Tragically, many of the countries she visited are now suffering in the terrible civil wars raging in the Middle East. 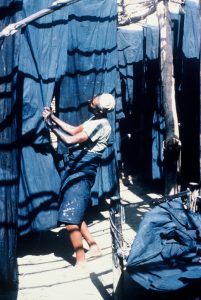 Jenny also told us about her latest book Deeper than Indigo in which she traces the life of Thomas Machell, a forgotten explorer from the 19th century. She had been introduced to his diaries in the British Library, after being shown one of his watercolours entitled Indigo Planters after Tiffin.