He spoke to Martyn Goss who worked for the Exeter Diocese as a community organiser and they agreed to form The Exeter Food Action in cooperation with Devon and Plymouth Food Association. Initially all the supermarkets were very reluctant to give away their waste food so food was sourced through growers and other outlets. After a few years supermarkets like Waitrose and Aldi started to give away food to recognised organisations with strict conditions on where this food should go.

With other supermarkets agreeing to give away their surplus food there was a demand for more space and freezer capacity. The first storage facility was in Sidwell Street but, following the development proposals for Sidwell Street, Exeter Food Action moved to a storeroom off Blackboy Rd. and subsequently to a much larger warehouse on the Marsh Barton Estate.

Exeter Food Action’s constitution does not allow food to be given to individuals. All food must go to organisations such as St Petrock’s, St Sidwell’s, and the Salvation Army.  In 2021 Exeter Food Action joined forces with a national food charity, FareShare South West. This enabled the charity to guarantee food supplies which FareShare could access at a national level.

Supermarkets are becoming far more proficient in controlling their food waste especially fruit and vegetables, and are quite prepared to discount and sell misshaped vegetables to the public. With this in mind Exeter Food Action has struck up partnerships with local producers of fruit and vegetables and will arrange to pick and remove surplus stock. 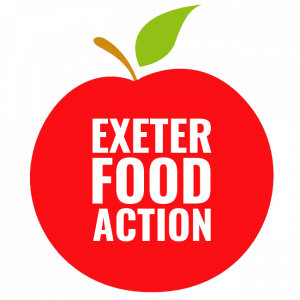 Jon never envisaged when he started this venture that after ten years the need to provide food for families and individuals would still be very high, with over 200 people a week relying on Soup Kitchens and other food outlets. The latest addition will be a state-of-the-art chiller to store all items including frozen food which could equate to over 30 tonnes of food waste year. We all agreed what a vital service Exeter Food Action is providing

Instead of expenses Jon asked for a donation to Exeter Food Action. If anyone would like more information on how to become a Friend, the website is at www.exeterfoodaction.org.uk/become-a-friend