Railway resilience in the South West

Richard Westlake, one of our members, opened his talk with a dramatic picture of Dawlish Railway station enveloped in spray and seawater from storm waves that were battering the railway embankment. This location became world news in winter 2014 when storm waves washed out the embankment, leaving the rail line suspended in space. Just one picture illustrates so well the vulnerability of the rail link west of Exeter, subject along the coastal stretch to crumbling cliffs, frequent storms and slowly rising sea levels. 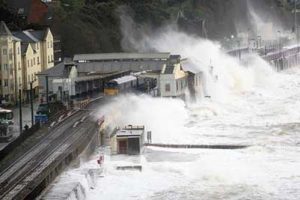 But it was not always like this in the west country. Richard showed us an impressive network of main and branch lines that reached deep into the SW peninsula, linking hamlets and villages to larger centres and helping to move agricultural products as well as people around and beyond the region. However, radical changes during the 1960s had a huge impact on the economy and way of life in the south west, as branch lines were closed, stations shut and many rural communities became isolated. These were the cuts made under Dr Beeching’s plan to save money.

So stringent were these cuts in the mid-20th century that the SW peninsula was effectively left with a single track link from Exeter to Waterloo and a line to Paddington via Taunton and to Wales and the Midlands via Bristol. Many of the old routes had track taken up and bridges dismantled, so there were few, if any, diversionary routes available in times of need such as when bad weather struck.

Recent severe weather events have brought the SW to a standstill, and Richard outlined some of the possible alternative routes that could be used to avoid the SW becoming cut off from the national network every time there is a spell of bad weather. The line round the north of Dartmoor for example which still exists as far as Okehampton is a major contender, while other options could include a new line from Exeter to Newton Abbot, a new causeway off the vulnerable south coast section and strengthening the existing track and sea wall. All options cost millions and will inevitably take years to plan.

In the immediate future, we can look forward to some more modern rolling stock (albeit second hand), the installation of giant culverts at Cowley Bridge and further upstream to improve flood resilience, strengthening of sea walls along the most vulnerable part of the coast, a reduction in maximum speeds between Exeter and Penzance, improvement of the Southern route with new passing loops and exploration of a new route from Exeter to Plymouth. But what impact would the latter have on the communities of Dawlish and Teignmouth?

Richard left us with plenty to think about, as the questions that followed his talk showed!