This was the Club’s first meeting of the year, and the first meeting to be held back in our old venue – Cowick Barton. We were expecting to meet in the small Monks Room, but the manager kindly upgraded us to the main restaurant. Those of us who had lunch were impressed with the quality of the cuisine.

We were delighted to welcome back John Allan, who is Archaelogist at Exeter Cathedral. John’s talk was entitled Recent Study of the Glass of Exeter Cathedral. For the last three years there has been scaffolding outside the east end of the cathedral. This has enabled the stonemasons to do extensive replacement of stonework high up on the outside of the cathedral. It has also allowed the experts (including John) to do detailed study and conservation of the Great East Window, which is the cathedral’s finest window.

During the talk John made clear that, although some of the figures in that window date from the beginning of the 14th century, the surrounding glass often dates from a much later period. The glass has not always been located in that window since medieval times, but has often been moved from other windows in the retrochoir and the Lady Chapel. The medieval glass was removed early on in the second world war, but the surrounding glass was left there and often damaged as a result of the bomb that fell on the cathedral. 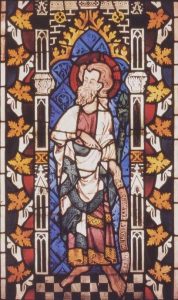 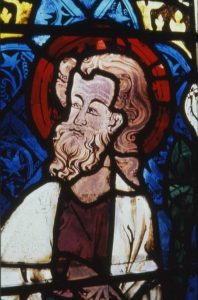 John showed us some lovely photos of the glass, illustrating the incredible detail of the different figures. He also showed how the mullions in the bottom half of the window are made of sandstone from the original Early English construction, while the upper mullions are in the perpendicular style and made of the much lighter Beer stone because that part of the stonework had failed and had to be replaced at the end of the 14th century. The whole window is now protected by a layer of special isothermal glazing, which is similar to double glazing, except that it allows air to enter between the two layers of glass.

If you want to see the restored window in all its glory, John recommended that you should come on a sunny day and bring your binoculars.