Visit to Coldharbour Mill on 24th May 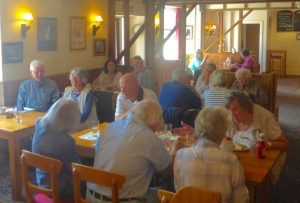 Lunch at the Halfway Inn in Willand

On a gorgeous sunny May day and after an excellent lunch in a local hostelry in Willand our group visited Coldharbour Mill in Uffculme.The mill is one of the oldest woollen textile mills in the world. It was bought by Thomas Fox, a Quaker, in 1797 for 1100 guineas. 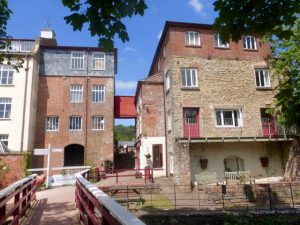 Entrance to the Mill 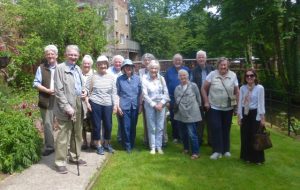 Our group waiting for our excellent tour 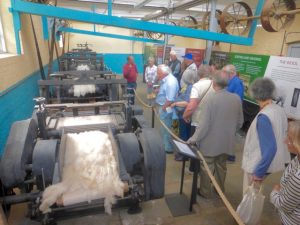 Originally the mill was powered by a huge waterwheel where we began our tour, and steam was later introduced to support the water power. We learnt how the wool is turned into yarn by a process of washing, untangling using carding paddles, and later combing machines, before the slubbing (twisting) process, and then roving before the wool is straightened to form a ‘sliver’ for spinning into yarn. Memories of our school days when we learnt about the Industrial Revolution and spinning jennies, flying shuttles and Richard Arkwright’s inventions came flooding back as we walked around the various machines at the mill. We followed the wool process and watched some of the machines that are still in full working order demonstrate the worsted spinning process and looms weaving woollen cloth. We also learnt about the strength and versatility of wool. The yarn produced was good quality and a wide range of cloths was manufactured including broadcloths (woven on broad looms) to hard wearing cloth, as well as serges and flannels for uniforms. The company won a contract in 1888 which lasted until after the second world war, to supply to the armed forces puttees which were later exported to other forces all around the world.

Working conditions in the mill were hard; the mill was a hot, dirty, dangerous and noisy place, cloth was often used to protect the ears hence the expression “clothears.” Urine was also used to help with some manufacturing processes and some say the expression “taking the p***” is attributed to those who had to carry and work with the urine. Women and children, often as young as 8, were used in the workforce as it was one industry where children could contribute to the family income. However lateness was not tolerated and minutes late were often translated into hours of wages lost. Women were often in charge of a number of machines and were set targets for amounts of wool produced.

The mills worsted spinning machines are still used to make a range of knitting wools in various weights. Four tartans , Green Devon, Blue Devon, Blackdown Hills and Somerset are still produced as are floor mats and other woven materials. 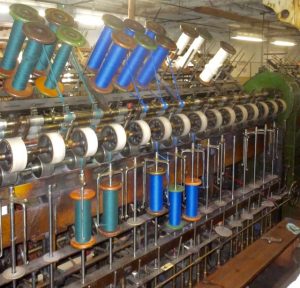 The Friends of Coldharbour Mill , a registered charity supported by mill staff and many volunteers, help keep this working museum the attraction that it is today.

This was a most enjoyable and educational visit. It also afforded the club the opportunity to bid farewell to and thank Ian and Elisabeth Thomson, who are returning to Germany, for all their help. They have been stalwart members of our club for a number of years both as committee members and regular contributors to its activities. Ian has been responsible for modernising the club by producing the newsletter and website where we hope his influence will continue to be seen.