A group of thirteen, slightly depleted by various seasonal illnesses, was shown round the Devon Heritage Centre by Brian Carpenter after a select lunch had been enjoyed by eight members at the nearby Miller and Carter Steakhouse, better known to many of us as the Barn Owl.

It was a fascinating afternoon. The Centre, now contracted out to the South West Heritage Trust, a charity based in Taunton, manages the archives held by the Devon Record Office and the printed and published books and images in the Westcountry Studies Library, and also houses the archives of the Meteorological Office.

Its reading room is much more spacious than the old premises in the centre of Exeter and Brian had looked out items relating to the University from the collections of the Westcountry Studies Library, including a run of the EUC bulletin from the 1950s to the 1990s. 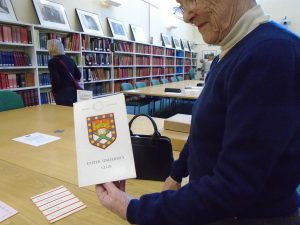 We were shown the various finding aids and reference works in the reading room, including parish registers from 1538 onwards, census returns for 1841 onwards and runs of newspapers extending back to the 18th century – all of them on microfilm or microfiche. 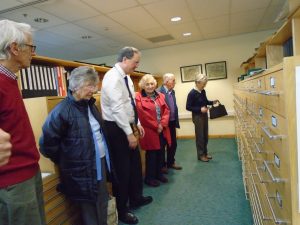 But it was the maps that stole the show, both in the reading room and the massive air-conditioned strong rooms that we were also shown round – the 1:500 plan of central Exeter from 1890, so detailed that the broad and narrow gauges of the railway tracks could be distinguished, the tithe surveys from about 1840, all neatly wrapped in calico, some of them so massive that they had to be located immediately opposite the strong room door to provide a straight run to the search room, the colourful map of Halberton, a pictorial view of the watercourses in the village dating from as early as 1607 and, in the document reception room, a magnificent coloured version of the map of Exeter engraved by John Rocque in 1744 that the Centre had just acquired. 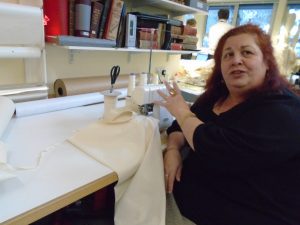 The conservator making calico sleeves for the maps.

Not all accessions are as welcome as the Rocque map and among the equipment in the document reception area is an industrial freezer used to freeze to death any minibeasts that might infest some of the records. Once decontaminated and admitted, many records require conservation and we were also shown the conservation room. Among the many items currently being conserved and refurbished are the Quarter Sessions records which cover a wide range of county administrative activities in an unbroken sequence from the 1590s to the 1970s. The contents are being cleaned and their original vellum packages repaired. Particularly remarkable was the massive light wall in the conservation section onto which the largest maps were pasted to facilitate meticulous work on their preservation. 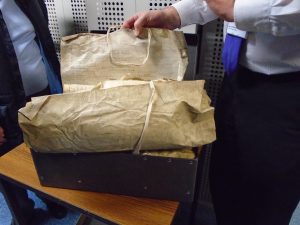 Recording is an important behind the scenes task. Digital cameras have now replaced microfilm in making preservation copies and we were shown a camera with lighting and a table that could take documents the size of newspapers. We were also able to speak with an archives assistant who was cataloguing the 80,000 master negatives of Beaford Archive photographers Roger Deacon and James Ravilious which are now held by the South West Heritage Trust.

And finally some of the group were able to establish an immediate link with some of the wealth of historical records held in the Devon Heritage Centre by identifying themselves on the collection of school photographs, which because of their panoramic format were stored with the maps. Such personal encounters with the records enthused members of the group, in some cases to pick up their own researches in the collections, in others to keep their eyes open for material that could be added to the collections and so not lost to posterity.