This GWR poster summed up our day, which was full of adventure and variety. We were destined to see butterflies and otters and to ride on the South Devon Railway during its 50th anniversary year but the whole day organised by Susie Hewitt included lots of extras. Our numbers fluctuated during the day as people did as much as they had time for and five of us returned to Exeter together. 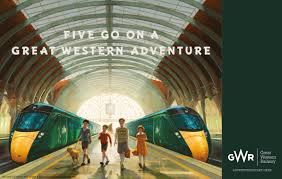 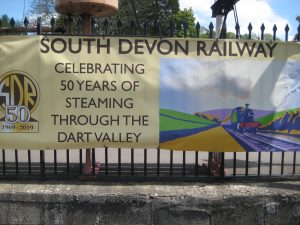 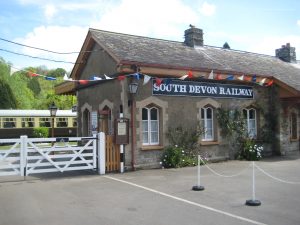 Our adventure began with the iconic rail trip from St David’s Station along the placid Exe estuary and past the red cliffs at Dawlish before we finally alighted at Totnes. With time to spare, we stopped for a coffee at the iconic Signal Box Café.

After a short walk in the sunshine we climbed aboard the coffee and cream painted coaches of the South Devon Railway, settling ourselves into the comfort of velvet-upholstered chairs in the refreshments carriage. It was mid-May and the trees were just coming into leaf so our seven mile journey along the upper Dart valley was beautiful. We passed bluebell woods, meadows with contented cattle, orchards with trees covered in blossom, fields of sheep and lambs and beside us as we steamed our way up the valley was the Dart – quite shallow in places as there had been no recent rain. We paused at Staverton along the way, well-tended by rail enthusiasts and apparently a popular location for the film and TV industry. Finally with a warning whistle, our steam train pulled into Buckfastleigh Junction Station.

Here was an extensive railway museum, full of interesting exhibits including details of the closure of the original line in 1962 as part of the Beeching cuts and a record of the opening of this heritage line in 1969. After a sociable lunch in the sunshine seven of us made our way to the nearby Butterfly House where we were entranced by the vibrant colours of the many butterflies that flew amongst the exotic tropical plants. There were also a lot of terrapins happily swimming in the large pond and basking in the shallows. But with temperatures and humidity resembling Singapore, many of us did not spend long in this very hot and humid environment! 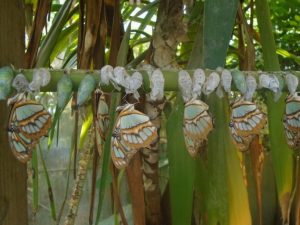 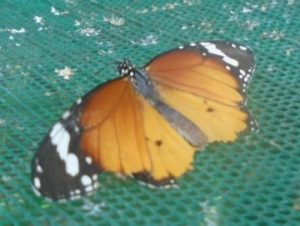 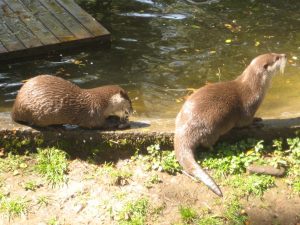 The Otter Sanctuary was next, where we watched pairs of three different species swimming and playing in their spacious enclosures. The small Asian otters were the most playful and kept us entertained until feeding time when their keeper arrived to throw small pieces of food into their enclosure for the otters to ‘catch’ and consume. Their sharp teeth and evident enthusiasm for food made us glad there was a substantial fence and double wall of strong wire mesh between the otters and all of us! We learned about each pair and how they came to be at the Sanctuary and were amazed to see the oldest resident otter who was aged 24.

After a welcome cup of tea and some cake, it was time for us to board our steam train again for the ride back to Totnes. Two of our number had already left for home so it was most appropriate to see the GWR poster at Totnes proclaiming ‘Five go on a GWR adventure’ as we had just enjoyed a day of adventure and discovery thanks to Susie’s planning and organisation.