Twelve EUC members travelled to St Germans – a sleepy village just over the border in Cornwall – on one of the new and most regal of modern trains, seemingly laid on just for our group. We were met at St Germans Church by Richard, the Chair of the newly formed St Germans Priory Trust which was set up to ensure that the building and the grounds surrounding the church can be an effective community resource as well as retaining the church as a place of worship. He told us all about the history of the church and showed us some of the main monuments inside. An earlier building on this site was the cathedral for Cornwall, until the area was absorbed into the diocese of Exeter just before the Norman Conquest. The present Grade 1 church building dates to the 12th century. Perhaps the best feature of the church is the beautiful Norman west entrance. 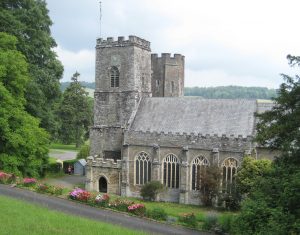 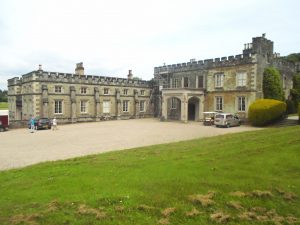 After a lunch break in Scholars Wine Bar, which has been tastefully adapted from the shell of the old school house, we headed on to Port Eliot itself. We immediately descended the narrow staircase into a vast basement kitchen, where we were introduced to 13-year old Albie, who is the 11th Earl of St Germans, and his mother Bianca, who is an ex-model. Venetia, the Chief Guide at Port Eliot, then took us on an extensive tour of the property, allowing us to visit parts of the property that are not normally shown to visitors.

Many of the rooms were very quirky. Everywhere were paintings of illustrious members of the Eliot family, some of them painted by Joshua Reynolds. A particularly remarkable room is the Round Room – 40 foot in diameter – designed by Sir John Soane, and with an enormous bizarre Riddle Mural circling the room. It was painted by Robert Lenkiewicz – perhaps the most famous artist in the South-West of modern times – who was a guest of the Eliot family over a period of 30 years.

In the basement there were rooms devoted to various specific activities, such as a servants’ hall with ancient rusty hip baths hanging on the wall, a china room, a gun room, a servants’ beer and cider store, a knife room, and a butler’s pantry. To bring in supplies to these rooms, there was an underground service tunnel running along underground outside, so there was no need for deliveries to come through the main parts of the building. On the top floor were a variety of bedrooms and bathrooms, in various states of disrepair.

After exploring the house, it was a delight to relax beside the river in the wonderful park that surrounds this country house. There is clearly an enormous work to be done to restore the house to its former glory, and it is to be hoped that more people will discover this hidden gem.